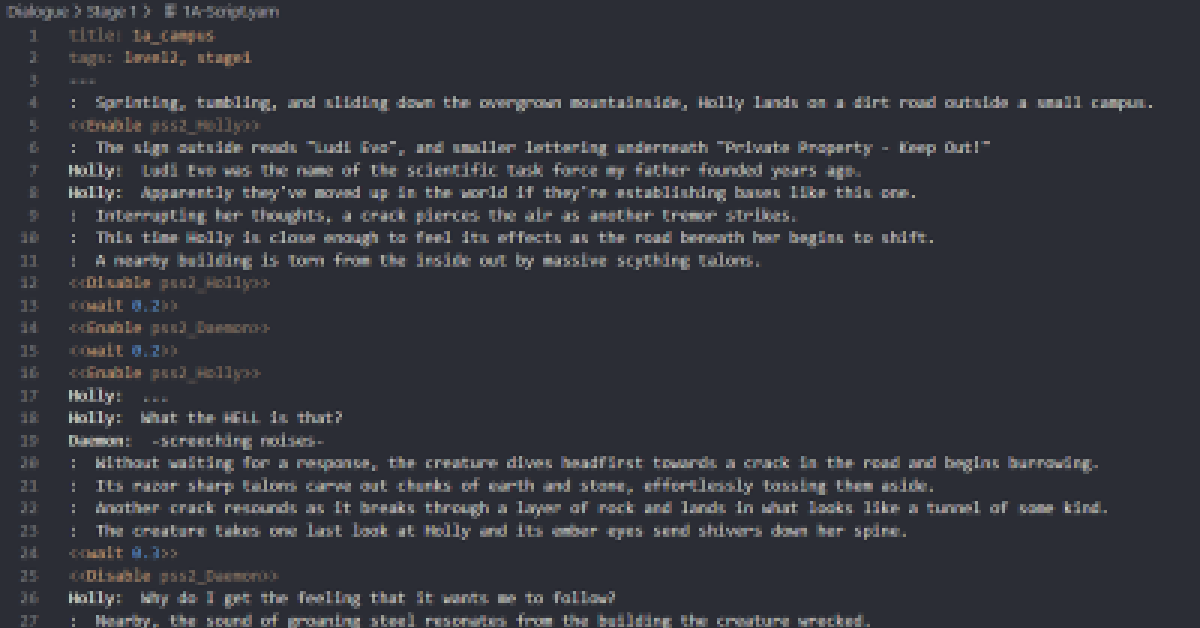 Apologies for the late update to the previous sprint.  My development machine has been disassembled for a chunk of the week while I switched out the power supply unit.  I’ve been experiencing intermittent crashes under heavy load, and I have hopes that this new PSU is the solution — it has not crashed again since.

I’m happy to report that Sabine was a much better sprint than Ahsoka and there’s far more productivity in the “Completed” column.  I will admit that I would prefer to be even more productive and I’ve been struggling during this current sprint, but some is better than nothing, especially given circumstances.

The most visible aspect of this sprint is in the form of the new expanded debug menu which allows me to jump to any scene in the game.  This became a necessary addition once I started writing full-length scripts as it became untenable to tap through an entire narrative chunk to get to where I was going.

While less visible, the biggest code contribution is the sweeping change I made to the storage system, which now handles three different types of scripting variables.

YarnSpinner natively allows you to store string, float, and boolean variables but I had previously only been storing string variables — believing that I would not require the other types.  Initially this made my serialization process far simpler and reduced code complexity drastically but I’ve come to realize that having access to numerical values (for example the number of times Holly has spoken with a character) is extremely beneficial.

Finally, I have begun the narrative process though each script has been like pulling teeth.  I’ve been working on trying to loosen my writing muscles by doing some reading (I’m currently in the middle of Dune, inspired by the pending release of the new movie) and various writing exercises.

When I was in high school I was extremely interested in creative writing and even wrote a novel and a novella, but I’ve rarely had the chance to keep those authorial skills sharp in the years since.  In many ways its like greeting an old friend that you used to know very well, however much like real life, I’ve found that my old skills have changed as much as I have.

Unfortunately I have no new artwork to share this week.  That said, I have been in correspondence with my artist and I know that he’s most of the way through the initial set of Holly’s facial expressions — sub-sprites that will be switched out to demonstrate different emotions during dialogue.  With all luck these will be ready to show off in the next sprint review!

Despite the late review, the current sprint has not been pushed back and there should be a post up next Monday (the 20th).