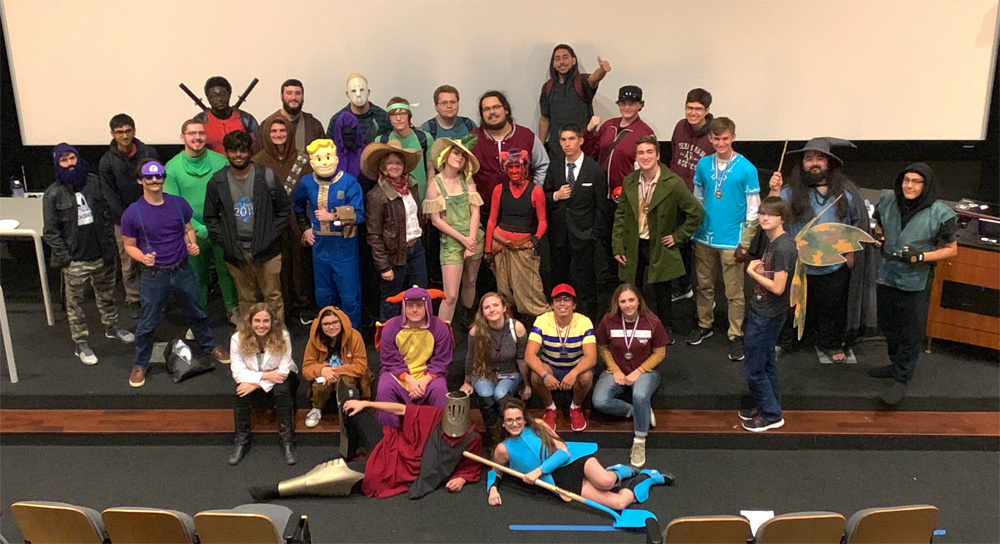 Assuming all goes well, the fall semester of 2018 will have been my second-to-last semester. It’s been a hard-fought journey wrought with more technical strain than I have ever encountered, and for this reason I lovingly titled it my “boss battle” semester. Allow me if you will, a brief retrospective of where I’ve been and what I’ve been doing. This will serve as a prelude to what I hope will be greater activity on this blog and this website.

When I signed up for this class to fulfill a degree plan requirement, I never would have expected that it would become one of my all time favorite computer science courses, second perhaps only to Computer Graphics.  Information storage is the true power of computer science — the driving force behind Google itself — and the technology that allows us to give people what they want.  Roughly the first half of the semester was spent studying search algorithms and frameworks like TF-IDF (term frequency – inverse document frequency) and PageRank.  These tools are used to break down documents into easily search-able tokens which we can use to later quickly find what we’re looking for, ranked in terms of relevance.

The second half of the semester focused on recommenders, like the kind of technology behind Netflix.  When given a set of data, we can represent each point mathematically and then find other similar data points.  For example, given a database of movie reviews, we can predict the rating a user would give other movies in that database.  This allows us to recommend movies to that user we think they would enjoy.

Information storage has applications in software development, particularly with big data applications, but I find it particularly useful in analyzing player activity in game analytics.  One of the most powerful uses I’ve seen of clustering algorithms has been in a study about player telemetry in World of Warcraft:

A Comparison of Methods for Player Clustering via Behavioral Telemetry

(I will admit I got sidetracked and explored a variety of related papers while searching for this one.  I am fairly certain it is the same one I read years ago, but your results may vary if you search for similar papers.)

As one of my “emphasis area” courses, this class was to be taken outside of my major, and I selected an elective from my minor without much understanding of the class itself.  After all, “communication and video games” is a rather vague area with many different directions it could be taken.  What followed was perhaps the most comprehensive history of video games from a variety of angles I have ever undertaken.  Over the course of the semester, four books were read:

Out of all of the books, I consider the first one, Replay, to be the most comprehensive and worth reading.  It provides an extended look at the technological history of video games from the beginnings of computing itself and Spacewar! at MIT all the way to the end of 2009.  Donovan speaks at great length over the major events in gaming history like the coin-op era, the rise and fall of Atari, and introductions of 3D graphics.

Isbister’s book was a short but excellent read, covering the basics of emotional game design and how game designers try to use the advantages of interactive mediums to influence audiences.  Perhaps the most out-of-touch was Nichols’ book on the business of video games, which seemed to have been based on academic studies done years before the release date.  While it is definitely focused more on the business aspect of games, I found it was interesting to see another take on the industry.

Finally, Consalvo had the most “specific” text, where she wrote about the rise of the Japanese gaming community and how it affects western markets.  One of the more interesting chapters focuses on how difficult localization is between the east and the west.  Most often this is not because of raw language barriers, but due to cultural differences.  An assumption that might be commonplace in Asia could be foreign to US players.  Preferences also change across the global divide as well, as Consalvo relates the differences in animation style.

Overall, the class provided me with a broad understanding of the history of gaming and gave me the opportunity to take a closer look at the legacy we are left with as game developers.

Last but certainly not least, the main focus of my academic endeavors this semester was my capstone course.  For those unfamiliar, capstone courses here at Texas A&M take the form of a semester-long group-based project.  For my capstone, I managed to convince several other people to create an educational VR video game designed to teach basic programming concepts to people haven’t been exposed to them before.  Rather than simply tell you about it, here is the video demo:

In short, players create “programs” by connecting a series of track that a ball rolls down.  The ball represents the flow of a program through a computer, and will change directions using switch tracks (if-statements), teleporters (loops), and more.  Like any project, there are definitely things I would improve given more time to work on them, but overall I am very happy with what I was able to achieve with my group during the course of the semester.  I have many plans for game development in the near future, but if I have more time I would love to go back and develop it further.

One of the biggest challenges for me during capstone was working with an inexperienced crew of people.  I will be the first to admit: some of them tested my patience.  I was challenged constantly about my design decisions and qualifications — at every step of the way.  More than anything, I’m thankful that I got to experience that.  This was an extreme case, but I need to be prepared for the industry and in a workplace environment, I may not always enjoy the same level of respect I get in other classes or my current workplace.  Being able to deal with people you aren’t the biggest fan of is a valuable life skill to have.  While I hope I will not have to draw on what I learned from that, I do feel more empowered to deal with future work conflicts.

I want to start writing on this blog more.  I want to buff my portfolio.  I want to ship a game before I graduate — ideally I’d like to ship a game before the spring semester starts.  From what I hear, having an actual shipped title — not just a finished game — really helps out with trying to get into the industry.  My goal for the break is to design and begin development on that game.

All of the games I’ve made so far have been developed for the computer or the HTC Vive.  And while that is great, I want to get something on a marketplace that everyone can download easily.  After looking at how much it costs to get a game onto the Steam store, I’ve decided to develop something for a mobile platform.  I’ve never done mobile development before, so it will expand my horizons, and it will hopefully be a good way to get my message out there.

As far as this website is concerned however, I want to be way more active on it — partly due to industry reasons and partly due to personal reasons.  I’ve always enjoyed having a voice on the internet and I’ve had several blogs in the past, but I think that maintaining a constant presence could be very fun.  I’m not really sure what the format the posts will take, because I think some posts will happen during the spur-of-the-moment, but others will be more deliberate, like this one.  I can see a few things happening:

In general, I want this to be a game workshop where I can express my ideas and think about them in a more structured environment than the back of my head.  Not everything has to be super formal, but that might be what I’m looking for.